Do you know that RAPIRO has a space where you can put distance sensor? This post shows how to use the sensor, "GP2Y0A21YK", with RAPIRO.

RAPIRO Control board is designed to compatible with Arduino and has I2C terminal and analog terminal for expansion. Let's make RAPIRO to change the eye color in respond to the value from the sensor. 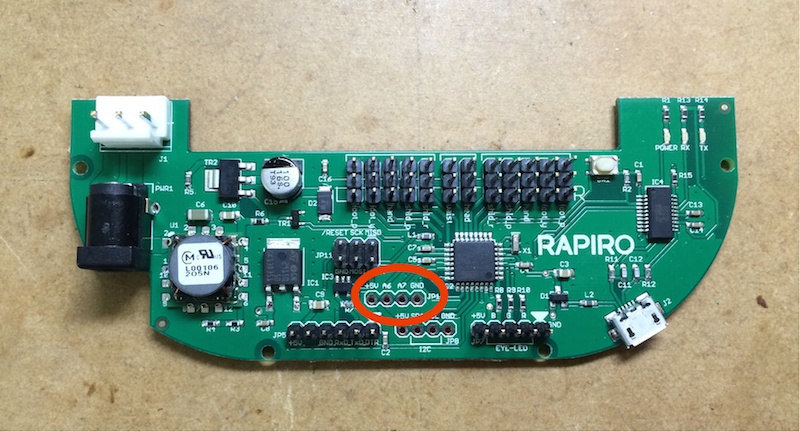 First, take RAPIRO Board out from Rapiro then solder the pin header to the area where circled in red on this picture.

When you have finished it then solder a cable.

Prepare 4-legs of pin socket, and put the cable to the pin header. From the left side, red cable(5V), yellow cable(signal), skip 1 leg and black cable(GND). I summarized it by heat shrinkable tube.

When you put the RAPIRO Board back, before putting the lid, put the proximity sensor to the area where you can see a space at the part of the RAPIRO's jaw. 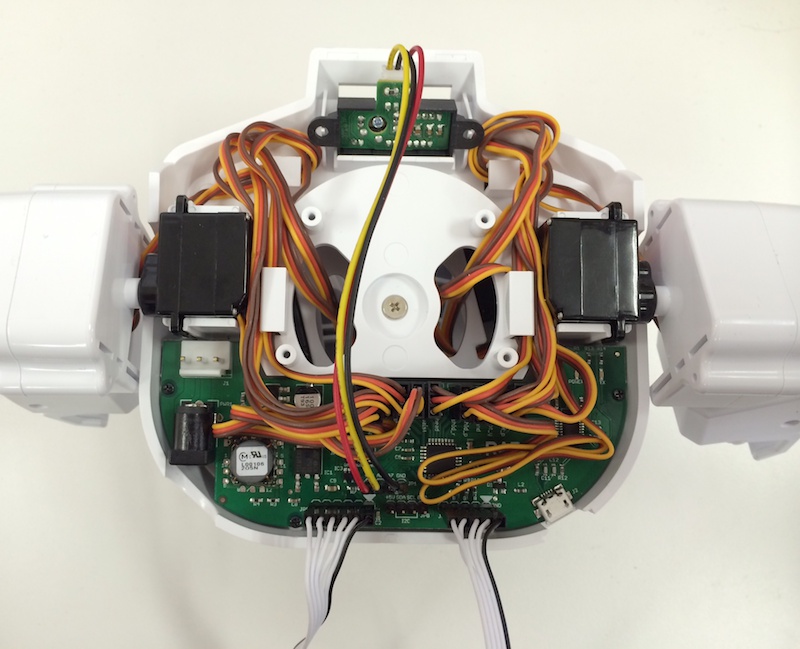 After you put the head back, the hardware is ready.

The firmware available from oga's repository on github. Zip file is here.

After you write the firmware, open serial monitor on Arduino IDE. Set the baud rate 57600 then input #A6, so you will see the value from the sensor. The number followed by #A is a pin number of Arduino.

The firmware which you wrote to Arduino Board not only has motion commands like #M01 but also has more specific commands. With those commands, you can set how long, which actuator how to work. The syntax is below.

Sorry if it's not easy to understand. Here I show you a sample of using commands for LEDs. Once you open the serial monitor of Arduino IDE, input command #PR255G000B000T001. You will see the eye changed to red. Next put command #PR000G255B000T001 then you will see the eye changed to green. Now you know how to change the color of the eyes so try to change the eyes to yellow by yourself.

Below is a sample code of python. This code require PySerial. So you want to install it, if you haven't yet.

You also need to prevent the Linux to using the serial port, otherwise, you can't read from /dev/ttyAMA0 from python.